Winding Down, but not too much

It's been a while since I've posted anything, life's been busy with quite a bit. As things start to get back to something resembling "the usual", I've been getting back to writing again. It's been a busy year, with adventure and plot twists a plenty. Here we are though, November and I'm finally getting back into the swing of writing in daily life.

I received two reviews so far for The Wraith's Memory, Between Gods and Mortals. I love (constructive) feedback from readers.

Getting on with being back in the swing of things, I'm still working on finishing up Twelve Lives and hope to be putting up a new part of that this week. Fingers crossed. I'm working on a different series for publication as well, to keep it interesting, so I'll talk more on that later.

One other thing, I'm excited to share that I have a few repeat reviewers from Dragonborn, reading The Wraith's Memory. It means a lot to have gotten some readers that invested in my work.

Thank you new and continued followers for your constant support, and heading into the holidays, I wish the best for everyone. 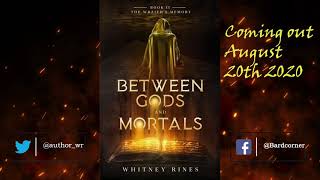